Caillou is an average, imaginative four-year-old boy with a love for forms of transportive machinery such as rocket ships and airplanes. A dreamer, Caillou is prone to frequent dream sequences in some episodes visualizing his daydreams and hopes, and many episodes chronicle his normal daily experiences with his parents, friends, and neighbors. Caillou particularly loves his stuffed dinosaur Rexy and teddy bear Teddy, along with his pet cat Gilbert, all of whom are depicted as puppets in segments featured in the earlier episodes.

Entertaining misadventures of a four year old boy named Caillou, where each day he discovers something new and interesting with his mommy, daddy, and Rosie. Between Caillou segments are segments featuring Caillou’s pet cat Gilbert, Caillou’s teddy bear, Teddy, and Caillou’s toy dinosaur, Rexy, in puppet form. The show deals with issues like fear of the dark, patience, being a good friend, being a good sibling, and other important facts of life.
https://s1.dmcdn.net/u/5ACKt1V_xyuvU3Ijx/360×360
#Caillou #sings #subtitles 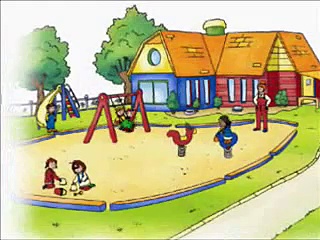